She works at the bookstore owned by her father. She met Masamune while he was visiting the store watching to see if people were buying his book.

She has long smooth black hair with a particularly delicate feminine appearance.

While she is kind, supporting Masamune and giving him recommendations for the books he might like, she is also strict and won't allow anyone to mess around in her store. She also has a good sense of humor, laughing while comparing Masamune and Elf's battle to a BL novel.

As one of Masamune's few friends and classmate, Tomoe knows his secret about being an author. She met Masamune when he visited her store to see if his books were selling well; since he was acting suspicious, her father caught him and they have been friends since. Tomoe constantly recommends him books and encourages him though she will not allow him to mess around in her store and will scold him if he does so. She has feelings for Izumi.

Tomoe is able to pinpoint if a book is popular or good really easily. She usually is able to give Masamune books he hasn't read before. 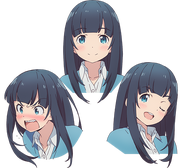 Anime Character Art (Face)
Add a photo to this gallery

Retrieved from "https://eromanga.fandom.com/wiki/Takasago_Tomoe?oldid=7260"
Community content is available under CC-BY-SA unless otherwise noted.